Zone Refining is a method of purifying germanium by segregating active impurities in the germanium based on their so-called Segregation Coefficient. This is how we produce High Purity Germanium at USD.

Zone Refiner A (ZRA) is used to initially purify raw Ge and head and tail pieces from HPGe single crystals, ZRA, and ZRB. The input materials have an impurity concentration of 1E+12-13 cm^-3 and the output is 4-5E+11 cm^-3. ZRA uses long graphite boats which excel at removing Aluminum impurities, as well as Phosphorous and Gaallium, but contributes some Boron impurities. Middle portions of HPGe ingots produced by ZRA are further processed in ZRB.

Zone Refiner B (ZRB) is used to further purify HPGe from ZRA ingots in addition to relatively pure (but not detector grade) portions of HPGe single crystals. The input materials have an impurity concentration of 4-5E+12-13 cm^-3 and the output is 1-2E+11 cm^-3. ZRB uses quartz boats coated with a layer of carbon smoke which excel at removing Boron impurities, as well as further removing Phosphorous and Gallium. Middle portions of HPGe ingots produced by ZRB are grown into detector grade single crystals using a Crystal Growth Furnace.

We use this machine to measure the crystal orientation of our HPGe single crystals using this X-Ray Diffraction measurement.

The Diamond Wire Saw is used to cut large bell shaped HPGe single crystals into thinner slices. Thin slices are taken from various locations along the z-axis of the crystal to be measured using the Hall Effect method. If two slices of the crystal are measure to have detector grade imupurity concentrations, mobilites, and resistivity, then the thicker slice in between can be used to fabricate a detector.

The Hall Effect measurement system is used to measure the net carrier concentration (impurity concentration), mobility, and resistivity of our zone refined HPGe and HPGe crystals.

The Sputtering Machine is used to deposit a thin, even layer of amorphous germanium (a-Ge) and aluminum onto the surface of HPGe to form contacts. This is how HPGe is made into a detector.

UNC researcher finishes the installation of HPGe detector strings into a Module. (Only firefox respects EXIF ration information in the image. Chrome cannot handle it correctly at this moment.)

Majorana Researchers prepare to perform the pre-installation test of a detector string.

A prototype Majorana module is being used for testing and R&D at UNC.

The cryogenics and vacuums systems at UNC.

The prototype module and supporting system such as a glove box,electronics, cryogenics, at UNC.

A typical Majorana detector string with one Natural detector on the top and multiple enriched detectors below. 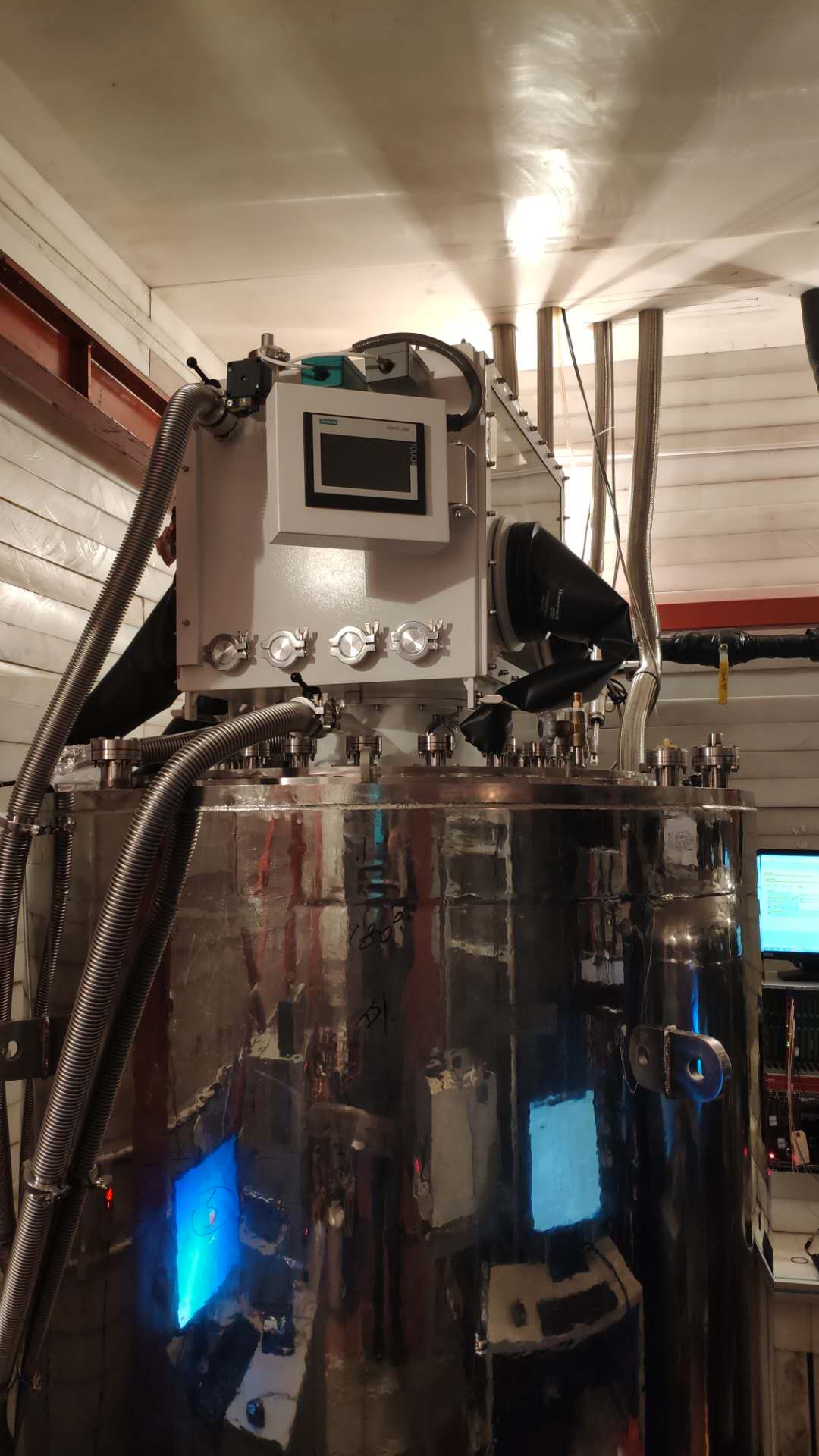 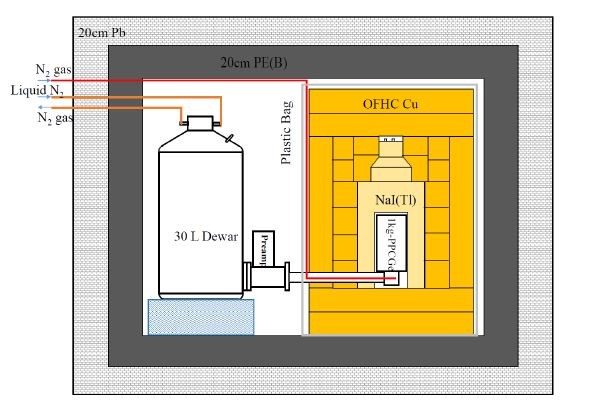 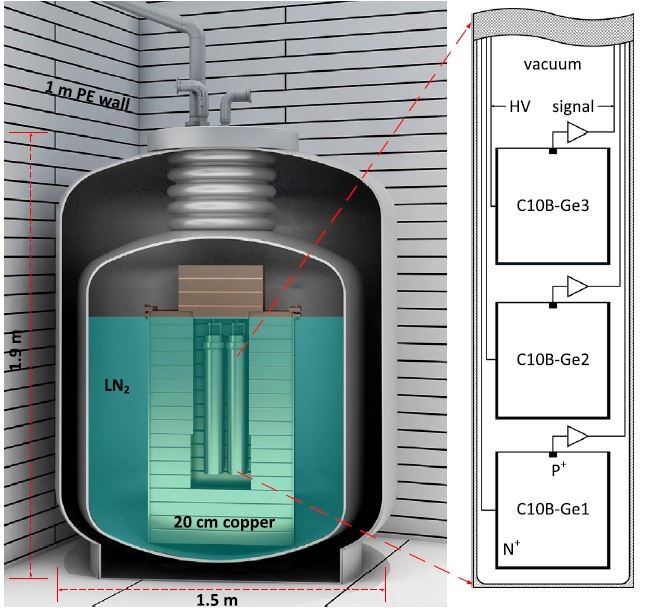 Galatea is designed to allow detector scans with alpha, beta and gamma sources. A system of three stages is located inside a vacuum tank. The infrared shield of the detector has slits along which the collimated sources can be moved. As the infrared shield can be rotated, complete mantle scans are possible. Currently, work is ongoing to fully automate Galatea.

K2 is mainly used to study drift paths patterns and the temperature dependence of pulse shapes.

Gerdalinchen II features a small cryogentic vessel which can be filled with liquid argon or nitrogen. Germanium detectors can be submerged in a controlled way avoiding icing.

Gerdalinchen II is mainly used to study the behaviour of detectors when directly submerged in cryo-liquid.

The TEXONO Collaboration is pursuing a research program on low-energy neutrino and dark matter physics at the Kuo-Sheng Neutrino Laboratory (KSNL) at a distance of 28 m from the 2.9 GW reactor core. The laboratory is equipped with an outer 50-ton shielding structure consisting of, from outside in, 2.5 cm thick plastic scintillator panels with photomultiplier tubes readout for cosmic-ray veto (CRV), 15 cm of lead, 5 cm of stainless steel support structures, 25 cm of boron-loaded polyethylene and 5 cm of oxygen-free high- conductivity copper. Controller room of KS laboratory and front plastic scintillator panels of CRV system are depicted in the picture.

It is an experimental setup of a coaxial p-type high purity Ge detector with an active target mass of 1.06 kg. The construction materials and detector geometry followed the ‘‘ultra low background’’ standards. The lithium-diffused outer electrode is 0.7mm thick. The end-cap cryostat, also 0.7 mm thick, is made of oxygen-free high-conductivity copper. Both of these features provide high suppression to ambient-background below 60 keV, such that events below this energy are either due to internal activity or ambient MeV-range γ’s via Compton scattering. Consequently, the background profile should be smooth and continuous below 60 keV down to the ranges where atomic effects are important.

This is an experimental setup of Ultra-low-energy n-type Ge detectors which is a matured technique for sub-keV soft x-rays measurements. The Ultra-low-energy Ge detector array consists of four elements, each having an active mass of 5g. Every crystal has a semiplanar configuration with a p+ electrode on the outer surface, and a n+ contact of a small diameter is used as the central electrode, from which signals are derived. The surface electrode is of μm thickness fabricated by boron-ion implantation. The crystal array is encapsulated within the cryostat made of oxygen-free high- conductivity copper and the crystal center-to-center spacing is 14 mm. The cryostat end cap is made of carbon composite with the thickness of 0.6 mm allowing calibration with low-energy x-rays outside. This detector technique makes the unexplored sub-keV energy window accessible for new neutrino and dark matter experiments.

This is an experimental setup of n-type point contact high purity Ge detector (nPCGe). The anomalous surface events in p-type point contact Ge detector (pPCGe) arise from a few millimeters thick transition layer with a weak electric field. The poor charge collection in this region reduces the ionization yield of the events and enhances the background at sub-keV energy region. The p+ outer surface conductive contact of nPCGe is fabricated with the boron implantation technique. The thickness of p+ contact on the outer surface of the crystal is the order of μm. The anomalous surface effect in nPCGe has been studied by the rise time of events and it was observed that there is absence of anomalous surface events in nPCGe.

It is an experimental test setup of p-type point contact high purity Ge detector. The outer surface electrode is at positive high voltage towards which the electrons are drifted. The small central contact electrode is at zero-potential from which electrical signals are extracted. The outer surface electrode is fabricated by lithium diffusion. It has a finite thickness of typically ~1 mm. Electron–hole pairs produced by radiations at the “surface layer” are subjected to a weaker drift field than those at the crystal “bulk region”. A portion of the pairs will recombine while the residual will induce signals which are weaker and slower than those originated in bulk. That is, the surface-events have only partial charge collection and slower rise-time. The surface-layer in p-type Ge detectors were mostly classified as ‘‘dead’’.

TEXONO collaboration is currently working on the Electro-Cooled point contact high purity Ge detector. A picture of Electro-Cooled p-type point contact Ge detector is shown in the figure. It comprise of a robust Linear Pulse Tube series (LPT 9310) cooler with dual opposed pistons which is helpful in minimizing wear and vibrations (less micro-phonic noise). Its design is compact and facilitate custom-built cold-tip temperature, real-time monitoring of temperature of various parts (cold-tip, cold-head and compressor) and overall power consumption as well as online control on stop/start cooler.

SNOLAB is Canada’s deep underground research laboratory, located in Vale’s Creighton mine near Sudbury, Ontario Canada. It provides an ideal low background environment for the study of extremely rare physical interactions. SNOLAB’s science program focuses on astroparticle physics, specifically neutrino and dark matter studies, though its unique location is also well-suited to biology and geology experiments. SNOLAB facilitates world-class research, trains highly qualified personnel, and inspires the next generation of scientists. SNOLAB strives to make science engaging and accessible to all audiences, and was thrilled to partner on this project that provides a new perspective on the search for dark matter.

SNOLAB has a low background counting facility underground capable of providing assays and measurements for the user community. Currently, the facility provides services in gamma counting using ultra-low background germanium detectors, alpha counting using an XIA UltraLo1800 alpha counter, passive radon emanation, radon and thoron measurements with electrostatic counters and alpha-beta counters, X-ray Fluorescence (XRF) spectrometry, and general gamma spectroscopy. The facility offers consultation to experiments and projects and tests all materials for current and future experiments for radon emanation levels to ensure they do not interfere with the data collected.
Within this framework, SNOLAB is investigating the possibility of developing an underground germanium crystal facility located at SNOLAB following the successful example of the germanium crystal facility at USD. Growing germanium crystal and having to capabilities to fabricate detector UG will reduce the cosmogenic radioactive background which is currently the limiting background for germanium crystal rare event searches.